“A place that loved a drink, a party and a punt..” So wrote Henry Lawson about Louth.

Not a lot has changed for Louth in that respect. They have a reputation for staging a great party and this shows through at the annual race meeting each August, the ‘Louth Races’.

Racegoers just love the sheer isolation of Louth, the colourful bush characters and the experience of watching the horses thunder past the winning post in a cloud of dust!

The Darling River township of Louth (present population about 30), was established in 1859 when an Irishman named Mathews built a pub to cater for the passing land and river-boat trade.

The village grew considerably so that by the turn of the century Louth not only boasted several hotels, shops and a bush nurses outpost but also its own newspaper. Now just a mere shadow of its former self, the quaint village is ideally located for access to the Darling River Run and affords a choice of eastern or western routes along the Darling River downstream to Tilpa, as well as the upstream section to Bourke and beyond ‘Back O Bourke’.

Nearby, the historic million-acre Dunlop Station was the first sheep station in the world to use mechanical shears in 1888. Toorale Station, one of the state’s newest National Parks, sprawls over 91,000 hectares just NW of Louth and boasts a remarkable history. In December 1892 Henry Lawson slaved away in the 46-stand Toorale shearing shed for a month and the experience forever influenced his writing about the hardship of life in the bush and how important mateship was to survive there.

Louth also is the site of an amazing and emotive structure known as ‘The Celtic Cross’, a polished granite, 24 feet high cross that dominates the cemetery on the hill overlooking the town. The monument was constructed by the founder of Louth, Thomas Matthews, who erected it as a perpetual memorial to his wife, Mary Mathews, who died in 1886. This magnificent granite monument was so skilfully designed and positioned that at sunset each day it reflects the suns image into the village of Louth. On the 19th August, the anniversary of her death, the reflection is able to be seen from The Retreat, which was her home. The monument is no only testament to the love and devotion of a husband for his wife but also the accuracy of navigation technology of the 1800s as its alignment was reportedly aided by one of the riverboat captains of the Darling River. Recent studies by the Surveyor General’s Department of NSW expressed amazement in the skills of the surveyors and ships Captains of the 1870s who were able to develop this engineering phenomenon with the limited equipment they had.

Visitors to Louth can observe this occurrence just prior to sunset on a cloudless afternoon, and the locals have thoughtfully marked the places throughout the year that the visitor can experience the 3 minute light show. Alternatively, head to Shindy’s Inn for a cold one – Dave takes everyone over to stand in exactly the right spot.

Golfing enthusiasts will find the village’s 9 hole golf course a real challenge… Locals and visitors alike are regularly seen hitting off and the Wednesday prior to the Louth Races sees anywhere up to 130 golfing enthusiasts compete in the annual Gundabooka Golf challenge. While in Louth be sure to drop into Shindy’s Inn for a cold beer, superb meals, basic grocery items, fuel, fishing bait and licences …. and of course a chat with the locals.

Louth has an undeniable reputation for staging a great annual race meeting that keeps crowds coming back… year after year and this year the date is August 11th 2018.

While racing in the village dates back to 1888 instead of horse and buggy, today’s racegoers are more likely to arrive in air-conditioned buses and cars, or by aeroplane. However, our great bush hospitality remains the same.

And while racegoers love the sheer isolation of Louth – the colourful bush characters and the experience of watching the horses thunder past the winning post in a cloud of dust – the action isn’t just confined to the Saturday. Instead, there are four days of entertainment and activities, so come along, join in the fun and embrace outback country racing at its best.

For more information on Louth Races, be sure to check out the website. 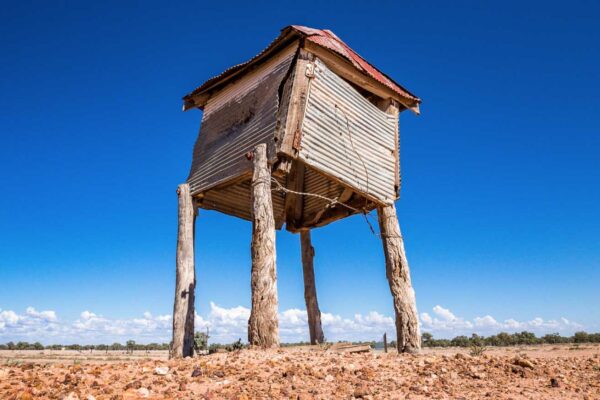 Staying with the Murray’s on their historic 6th generation, 320,000 acre sheep and goat station on the banks of the beautiful and iconic Darling River is described by many as their ultimate Outback NSW experience.