The quiet and pretty town of Balranald is located on the Murrumbidgee River 859 km from Sydney and one of the major entry points to Lake Mungo National Park and Yanga National Park.

Originally inhabited by the Wemba-Wemba Aboriginal group, who called the area ‘Nap Nap’, Balranald was probably the first town settled on the New South Wales side of the river.

The population of Balranald Shire is approximately 2,500 people and the township has become renowned for the habitation of a frog! But not just any frog: Balranald is home to the highly endangered Southern Bell frog species (Litoria Raniformis) which is listed on the NSW Endangered Species List.

Gazetted a town on the 4th April 1851, Balranald is considered the oldest settlement on the Lower Murrumbidgee.

George James McDonald, the Commissioner for Crown Lands, named the town after the place he was from, Balranald on the Isle of Uist in the New Hebrides.

The town prospered on the primary industries of wheat, wool and red gum timber. Agriculture is still a strong factor for the economy of the town with farmers now growing canola, cotton, wheat, barley, fruit, grapes and vegetables.

Balranald is a potential geographer’s living classroom. It is a pivotal place of two great Australian landscapes, to the east the Riverina Plain and to the west the Murray Darling Depression.

Euston, the Shire’s second town located 80kms west of Balranald on the Sturt Highway, is ideally positioned on the mighty Murray River. Other localities in the Shire include Kyalite (on the Wakool River), Oxley (between Hay and Balranald on the Murrumbidgee River), Penarie (Historic Homebush Hotel), Hatfield and Clare (both on the way to Ivanhoe).

Aboriginal Culture is also in abundance at Yanga National Park. These days it’s a National Park which celebrates its Indigenous heritage, pastoral history and many natural wonders.

There is much to see and do in and around Balranald: 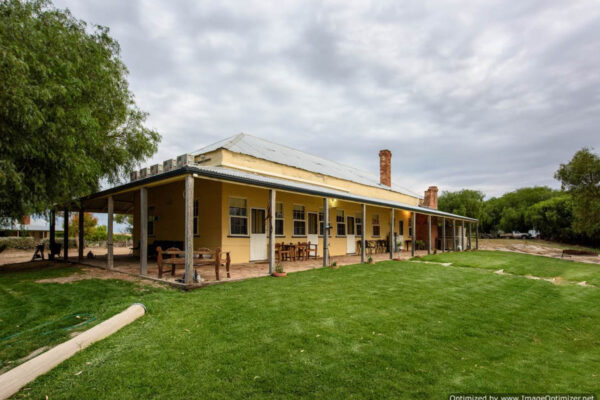 Take a step back in time, unwind, relax and enjoy unique accommodation in the restored self-contained Workman’s quarters.